A brief History of Coffee

From a tiny little bean to the second most traded commodity in the world, here’s a whistle-stop tour through the history of coffee.

Believed to have originated in Ethiopia, the story goes that one day an Ethiopian goatherd came across his goats as they were dancing, and he attributed this strange behaviour to the red berries they’d been eating. Another version suggests that the goatherd gave the beans to a monk who, in a fit of temper, threw them on the fire, releasing the lovely aroma. Whether either of these tales are true or not, the coffee bean is thought to have originated in Ethiopia before moving north to Yemen at some point in the fifteenth century, first arriving at a port called Mocha…

Becoming popular in Egypt, Iran (then called Persia) and Turkey, the first coffee-houses started to appear. After a while, coffee began to spread east to Indonesia and India and west to Italy, and from there to the rest of Europe – on to Holland, and in 1570 Venice, where it quickly gained popularity.

Throughout the 1600s, coffee houses appeared all over Europe: in Holland, Germany, France and England – where the first coffee club opened in Oxford.

In the early eighteenth century, coffee continued on its journey when a captain of the French Navy took some coffee plant clippings to the Caribbean which had ideal growing conditions. From then on, plantations spread throughout the Caribbean and Central and South America.

By 1852, Brazil had grown to be the world’s biggest coffee producer which it remains to this day. 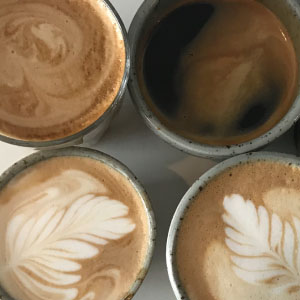